This fall will mark three years since Mac Miller’s untimely death. Since then fans have received a decent amount of posthumously released music from the Pittsburgh rapper, but the next one involves one of his most-celebrated mixtapes: The rapper’s 2014 project Faces is set to arrive on streaming services soon. The news was shared by Mac’s longtime friend and producer ID Labs, who confirmed the news on Reddit.

In a screenshot that was shared on Twitter, a fan wrote, “I think ID Labs said on this sub a few months ago that they were working on getting faces cleared for streaming platforms but it was going to take time due to clearing samples, maybe it’s finally getting done… hopefully.” ID Labs, who produced “It Just Doesn’t Matter” and “Therapy” from the mixtape, caught wind of the comment and wrote, “This is correct and currently happening.”

If the project arrives on DSPs later this year, it will be Mac’s second mixtape to be placed on streaming platforms. Last year, his breakout K.I.D.S. was added to the platforms in April to celebrate its tenth anniversary. The re-release came with two new songs, “Ayye” and “Back In The Day.” New in Numbers 6.0 for Mac Performance and usability improvements to smart categories. Save custom shapes that automatically sync to all your devices using iCloud. 8/10 (20 votes) - Download Numbers Mac Free. Numbers provides you with everything you could possibly need to create spreadsheets on Mac. This program is included in Apple's iWork office suite. Spreadsheets are essential for those projects in which we need to keep control of a large amount of data. ‎Create gorgeous spreadsheets with Numbers for Mac. Get started with one of many Apple-designed templates for your home budget, checklist, invoice, mortgage calculator, and more. Add tables, charts, text, and images anywhere on the free-form canvas. As soon as you start typing a formula, you'll get i.

View the profiles of people named Frances Miller. Join Facebook to connect with Frances Miller and others you may know. Facebook gives people the power. DISCUSSION Mac Miller - Faces (5 Years Later) Today marks the 5 year anniversary of one of the greatest mixtapes of all time, something some people might feel the need to scoff at for whatever reason, and what I feel to be Mac's best piece of work. This item: Baby Faces (Look Baby! Books) by Margaret Miller Board book $4.99. Ships from and sold by Amazon.com. FREE Shipping on orders over $25.00. Clap Hands (Oxenbury Board Books) by Helen Oxenbury Board book $7.99.

I was really enjoying hating Mac Miller. He was so much fun to hate. Here was this annoying bemused-goon Bob Marley poster-type motherfucker who came out of nowhere and rode the Wiz Khalifa wave to fratty stoner-rap stardom. At SXSW a few years ago, while waiting for Big K.R.I.T., I saw him play one of the worst rap shows I have ever seen in my life, and I have seen some real doozies. And because he was all over the place at SXSW that year, I somehow saw him play the very same awful show again when I was waiting for some other rapper to come out. It was like this guy was following me around and bothering me. I got used to hating on him, relied on it. I watched his YouTube videos just to hate them. I watched an interview where, by way of bragging about his openmindedness, Miller talked about liking G. Love And Special Sauce, which is probably the easiest and most direct way to convince me to hate another human being and which said bad things about Miller’s whole approach to rap. The early-’90s New York rap great Lord Finesse sued Miller for using one of his old beats on a mixtape track, and even though the lawsuit could have (and sort of did) throw the entire concept of mixtapes into lawsuit-fearing stasis, I half-rooted for Finesse. When Miller’s Blue Slide Park album rode a slow sales week to a Billboard #1, my hate reached ecstatic levels. And even when Miller started hanging out with Earl Sweatshirt and adapting a pretty great loopy-non-sequitur flow, I still held him in a certain suspicion; after all, it was probably possible to be friends with Flying Lotus and still be a dickbag, right? Well, Miller is not a dickbag — or, if he is, he hasn’t let it stop him from becoming a great rapper. Because on Sunday, he released an endless ’90-minute resin-scraping odyssey that’s easily the best thing he’s ever recorded. And now I can’t hate him anymore. I’ll miss it.

If you’re so inclined, you can still find things to hate on Faces, Miller’s pretty-great new tape. There’s the length — 90 minutes, when it could easily be half that. There’s the line, early on, where he says, “If I ain’t in your top 10, then you a racist,” which, even tongue-in-cheek, is just dumb. He brags, “I did it all without a Drake feature,” on the same tape where he has a Rick Ross feature. He makes extremely goofy cultural references: “I’m a magnet for them zeros, call me Edward Sharpe.” His production aesthetic is getting progressively more faded and numb, moving into muffled spacey jazz that practically strangles the possibility of adrenaline ever kicking in. He doesn’t have the best line on his own mixtape. (Earl Sweatshirt: “Don’t approach me with nothing that isn’t money or breakfast.”)

But heard in the right light, all those weaknesses become strengths. The running time is excessive, but it helps you slip into deep zone-out territory, turning it into a soundtrack for staring out the window until you wonder where the entire afternoon went. That’s also true of the production, most of which is from Miller himself. (Even at his Blue Slide Park nadir, Miller was working with adventurous producers like Clams Casino and Young L. At this point, he’s an accomplished producer in his own right, with an entire Vince Staples tape to his credit.) Putting tracks together, Miller doesn’t bother much with drums, focusing instead on airy Fender Rhodes loops and lazy horns and random sound-clips that burble up from nowhere. He even uses his friends as sound effects. Schoolboy Q gets a guest credit on “Friends,” but he doesn’t rap; he just gibbers in the background. The presence of people like Earl, guys who can outrap Miller without even trying, has obviously nudged Miller toward writing denser and more involved lyrics, and it’s situated him in a scene and a context that’s painted him in the best possible light. His delivery now is a heavy-lidded mutter that’s let him add all these new shades and subtleties to his lines. He’s no longer jumpily ingratiating himself with whoever listens; he’s almost actively pushing an audience away. And those clunkers, in a weird sort of way, add to the charm. Perfection wouldn’t suit Miller the way clumsy stumbling try-hard ambition does. 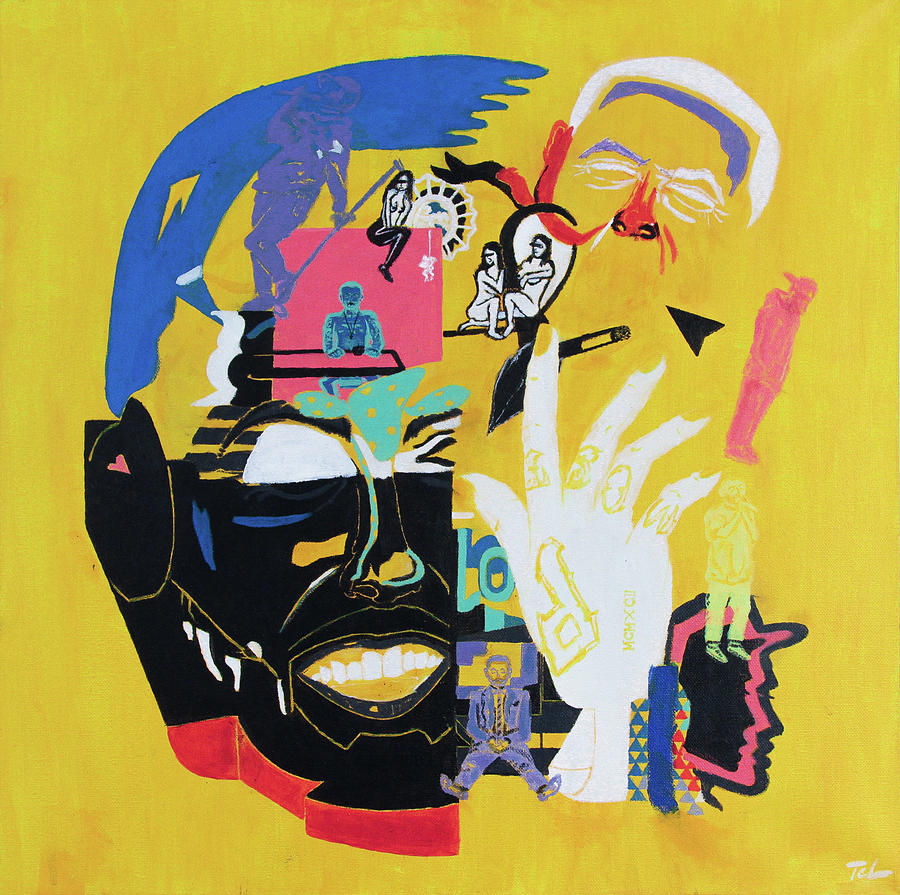 When he got famous, Miller moved from Pittsburgh to a Los Angeles mansion with a recording studio in the poolhouse, and that studio quickly became an epicenter for the ascendant young Californian rap underground. And that move has done wonders for him artistically. He’s now got this woozy expansive cloud of sound that could blow in any direction at any minute, like the moment on “Uber” where Mike Jones shows up and turns it into a Mike Jones song. But Miller hints over and over on Faces that the move might not have been the best thing for him personally. Faces is only a few days old, so I’m still picking through it, but it’s obviously a personal record, an album about flaws and failures and getting lost in your own head. It’s no coincidence that the tape came out on Mother’s Day. There’s a lot of talk about heavy, debilitating, self-destructive drug use, and a couple of lines about knowing he’s letting his mother down. (Miller on “It Just Doesn’t Matter”: “I’m with the homies, bumping Counting Crows / Just went through a half-ounce of coke.” Then, a few lines later: “Don’t tell my mom I got a drug problem.”)

In a way, Faces is a classic Laural Canyon singer-songwriter album, an album about getting rich too fast and waking up high and numb and confused in California, surrounded by friends but realizing you don’t really know any of them, wondering when the world will realize you’re a fraud, wondering whether you really want any of this, wondering if all these drugs are destroying whatever talent you might have. There’s a whole song, “Happy Birthday,” about Miller skipping his own birthday party and wondering whether anyone will notice: “I’ll just stay down here inside the studio / Doing blow and paraphrasing The Crucible.” And there’s a self-deprecation in some of these lines that belies real anxiety: “Bust the speakers with some bullshit rap / I’m on drugs, all my new shit wack / Remember that.”

No point in hating Mac Miller anymore; he’s happy to do it himself. And anyway, we’ve got Macklemore now.