I Spy Fantasy is what you can call a casual game for all ages but with a bigger emphasis on the youngest. It’s a hidden object title that uses I spy style games and has you exploring a fantasy world where magic and dragons exist.

Simple gameplay for anyone to enjoy

In I Spy Fantasy you will come face to face with a variety of environments, each one with a distinct look and a unique set of objects to identify. All of the sections are fitted with a small riddle that mentions several objects and using your sense of observation, and wit, you will have to identify and click them.

They come in pairs, singles, and a lot of the time, they are not what you would expect. So, a little bit of outside the box thinking is key in some instances. Once you solve a puzzle, you get a piece of the Mermaid’s book, and collecting them all is your main objective.

It’s poor in looks but rich in spirit

I Spy Fantasy is from a good deal of years back so in the visuals department, it might not please a more mature audience. When it comes to small kids, though, it’s hard to go wrong with it. After all, it has riddles, plenty of colors, and a fantasy world.

The puzzles can be interesting if you’re a fan of the genre or have a soft spot for casual games in general. If I Spy Fantasy were to receive a makeover, it would be a nice game. A few gameplay updates wouldn’t hurt it either.

Casual at its best

To wrap it up, I Spy Fantasy is as casual as they get. All You have to do is listen to riddles, look at colorful sceneries and click on objects to solve puzzles.

I Spy Fantasy was reviewed by

Alexandru Chirila
2.5/5
LIMITATIONS IN THE UNREGISTERED VERSIONSYSTEM REQUIREMENTSThis enables Disqus, Inc. to process some of your data. Disqus privacy policy

We just released a Feb. 5 '89 prototype of DuckTales for the NES!
If you'd like to support our preservation efforts (and this wasn't cheap), please consider donating or supporting us on Patreon. Thank you!

A game based on the classic time-waster. With some fantasy elements, too, obviously. Ages 6-10? You don't believe that, do you?

The treasure must be nearby. Let's keep looking.

You know, some people say a mermaid lives down here.

You don't believe that, do you?

This audio is found in triplicate with the game's audio - D_INTRO, D_INTROB, and D_INTROC. All three of the adventures in this game themselves have three variants, usually termed A, B, and C in the files, so these three pieces of audio were probably placeholders for the final intros. The final intros are actually Bink videos with the audio included, so there are no corresponding used audio files. Live dock weather.

Interestingly, the two men mention that it is said that a mermaid lives in the ocean. In the final game, the mermaid is actively involved with your treasure hunt, so this hints that originally the mermaid was going to be more elusive.

Congratulations. You found the treasure. To choose another fantasy, click here.

Another placeholder. It goes unused for the same reason as the intro - the mermaid personally congratulates you, and the audio and video are together in a Bink video file.

These are early versions of the countdown that comes near the end of the Fuel Crystal Hunt adventure, when the ship is about to blast off. They go unused because both situations' audio is included with the corresponding video in Bink video files.

In the countdown, numbers 8 and 7 swapped places for the final. Checking the circuit board comes after turning on the air supply.

I'll take the key lying on the floor

To unlock the gate right next to the door.

I'll take that key away from you!

Look! The lizard has a key.

I'll take that away with me. 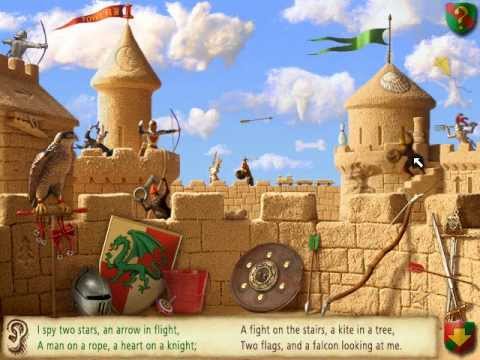 These three voiceovers are largely the same as their used counterparts, but their voice actor is different. In addition, the first one ends with '..next to the door' in the early version, but just '..next door' in the final.